Lyco of Troas and Hieronymus of Rhodes - Text, Translation, and Discussion
William W. Fortenbaugh, Stephen A. White
157,10 €
Kustantaja:
Taylor & Francis Inc
Sivumäärä:
470 sivua
Asu:
Kovakantinen kirja
Julkaisuvuosi:
2004, 31.03.2004 (lisätietoa)
Volume 12 in the RUSCH series continues work already begun on the School of Aristotle. It focuses on two Peripatetic philosophers who lived in the third century BCE, when Stoicism and Epicureanism flourished. Lyco of Troas was the third head of the Peripatos after Aristotle. Hieronymus of Rhodes was a member of the school and an antagonist of Lyco.

Excellence in teaching was Lyco's distinguishing attribute, but he also attracted benefactors and had the reputation of being a bon vivant. Hieronymus is best known for his work on ethics, but he also wrote on literature, history, and rhetoric. Our understanding of the work being done in the Peripatos during the third century BCE will be greatly enhanced by Peter Stork's new edition of Lyco and Stephen White's edition of Hieronymus.

The two editions in this volume are accompanied by full translations as well as notes on the Greek and Latin texts (an apparatus criticus) and substantive notes that accompany the translation. The editions will replace those of Fritz Wehrli, which were made over half a century ago and published without an accompanying translation. In addition to the two editions, this volume includes ten essays that address significant themes presented by the texts. Three of the essays deal with biographical material: "Diogenes Life of Lyco" (J orgen Mejer), "Hieronymus in Athens and Rhodes" (Elisabetta Matelli), and "Peripatetic Philosophers as Wandering Scholars" (Peter Scholz). Four develop philosophical topics: "Hieronymus of Rhodes on Vision" (Todd Ganson), "The Historical Setting of Hieronymus fr. 10 White" (Peter Lautner), "Peripatetic Reactions to Hellenistic Epistemology" (Hans Gottschalk), and "Lyco and Hieronymus on the Good Life" (Stephen White). Three concern rhetoric and literature: "Lyco Phrastikos" (William Fortenbaugh), "Hieronymus on Isocrates' Style" (David Mirhady), and "Hieronymus in Ancient Commentaries on Hesiod's Shield" (Andrea Martano). 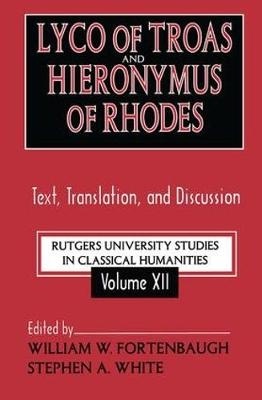