Representation From Above - Members of Parliament and Representative Democracy in Sweden
Peter Esaiasson, Soeren Holmberg, Peter Mayers
140,30 €
Kustantaja:
Taylor & Francis Ltd
Sivumäärä:
370 sivua
Asu:
Kovakantinen kirja
Painos:
New edition
Julkaisuvuosi:
1996, 18.07.1996 (lisätietoa)
This book uses Sweden as a test case to analyze how parliament and elected representatives function in a representative democracy. Despite the status of Scandinavian countries as perhaps the world's most egalitarian societies, the book argues that the best summary characterization of Swedish representative democracy is an elitist system run from above. The book also argues that an individualist representational model is relevant to the Swedish setting and most likely, to other settings as well. Representative democracy is not just party-based democracy - not even in a country with strong and disciplined parties. The book takes a broad approach to the study of political representation. It integrates into a single analytical framework concepts and theories from neighbouring traditions such as legislative behaviour, opinion formation and interest organizations. The study is based on a comprehensive set of data, including three surveys of the Members of the Swedish Parliament, corresponding voter surveys and content analysis of mass media and parliamentary records. 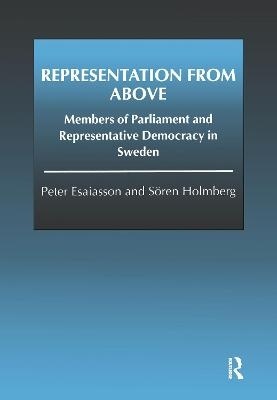