10 Years Younger Cosmetic Surgery Bible
Jan Stanek, Hayley Treacy
73,80 €
Käytetty alk.
72,00
Kustantaja:
TRANSWORLD PUBL
Sivumäärä:
352 sivua
Asu:
Pehmeäkantinen kirja
Julkaisuvuosi:
2007, 01.02.2007 (lisätietoa)
10 Years Younger, launched in April 2004, was the first lifestyle series on British television to feature cosmetic surgery. Since then, increased acceptability, availability and affordability have prompted a massive rise in the number of cosmetic procedures carried out each year in the UK, with that number set to top a quarter of a million in 2007. It is now believed that 45% of women and 37% of men in the UK would consider cosmetic surgery.

10 Years Younger has undoubtedly influenced the public's perception of cosmetic surgery and here, in the 10 Years Younger Cosmetic Surgery Bible, Jan Stanek openly and honestly discusses the pros and cons of each procedure. All aspects of each process are discussed - what it involves, who should consider it, what will it solve, what it won't solve, the cost, the potential risks, the potential reactions and the length of recovery. There are even before and after photos to show you what can be achieved. So, if you're considering a face lift, a boob job, a tummy tuck, or even just a Botox injection, this is the book for you. 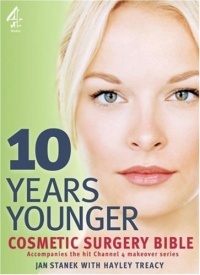