Everest, Nepal and Jimmy Carter : trekking on the roof of the world
Matti Munnukka
28,10 €
Kustantaja:
Books on Demand GmbH
Sivumäärä:
140 sivua
Asu:
Kovakantinen kirja
Julkaisuvuosi:
2018, 11.01.2018 (lisätietoa)
The book describes the author's Everest trek in autumn 1985. He travelled there for five weeks together with a Finnish, an Australian and a New Zealander friend. They walked hundreds of kilometres up and down the mountains. They crossed the passes, walked along the mountain ranges, passed through the mountain villages and met friendly people like Sherpas, Gurungs, Magars, and Rais. It was quite a memorable trip, although the author didn't encounter an abominable snowman in the Everest region as was the case in the Langtang Himalaya six months earlier. However, he met the former President of the United States in the middle of the Himalayas. For years, Jimmy and Rosalynn Carter had been making plans for a Nepal visit and Everest trek. Like the author of the book, they planned to visit in October, because the autumn season is considered to be the best time for trekking in Nepal; but nature had decided otherwise. Both the author and the President were surprised by the monsoon that lasted longer than mid-October, making the Everest trek a lot more difficult and demanding than usual. 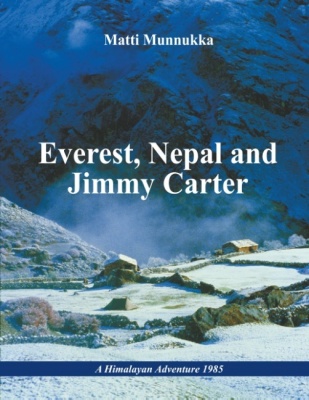